Middle English Dictionaries confirm that context should provide the key to filling in the measure, which in this case must logically be a weight. Shifting to a microfilm reader in the Map and Large Document Reading Room at The National Archives, I transcribed a second recipe, jotted down at the end of John Flamsteed’s “De Sole 1694 et Fixis 1695″ containing drafts of several treatises on the Earth’s motion and work on the fixed stars, with other notes and calculations chiefly planetary”, from the Royal Greenwich Observatory collection (RGO 1/39, f.172):

INKE
Take a Gallon of raine Water put into it 1 1/2* of ye best blue Gall[s]
let them be small black & sound, break them into 3 or 4 peaces each
& let it stand near ye fire 8 or 10 days often stirring yn put into it 1/2 oz of
Allem ye like quantity of Indigo & a pound of Copperice wth Gumm Arabic
ye like quantity yn let it stand about a Week, & it will be fit for Vse
[* a weight-measure is again assumed here, with the same solution as noted below]

This recipe is cutting-edge in its use of Indigo to produce blue ink – it had been banned as a dye-stuff under Queen Elizabeth I, with the Act not repealed until the reign of King Charles II, who commissioned the founding of the Observatory at Greenwich and appointed Flamsteed its director as the first Astronomer Royal, tasked with “rectifieing the Tables of the motions of the Heavens, and the places of the fixed stars“, making it especially fitting that Indigo ‘Inke’ should be scribbled at the back of his notes.

Their directions being remarkably similar, minus the Indigo, on the basis that the 15th century recipe uses a quarter of a gallon of Water in place of Flamsteed’s gallon, it follows that the weight-measure to be quartered is a pound, so one should stir 4 ounces apiece into the pot.

Ferrous sulphate, a.k.a. Copperas, a.k.a. Vitriol, reappears as an ingredient in another fascinating document held by The National Archives, this time amongst its collection of State Papers Domestic, the Discovery Catalogue describing it as a “Treatise on alchemy, with various recipes added in different hands from fo. 169”, dating to the mid-sixteenth century. Folio 155 survives as a remnant cut from the original leaf down both margins and along the bottom, its opening lines reflecting the alchemical correspondence between the seven Noble Metals and their ruling Planets, ordered along the descending path of the Alchemical Journey: 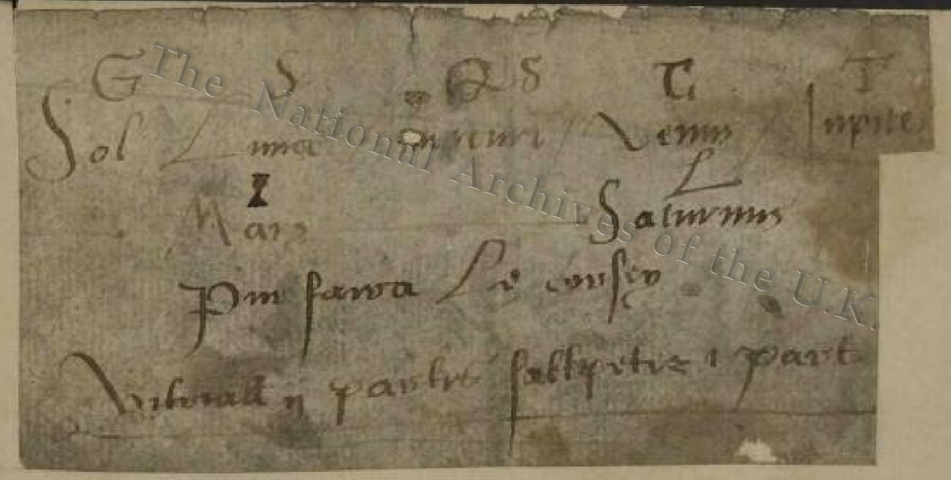 Writing in Middle French, the anonymous author advises us that ‘To make The corrosive [:] / Vitriol 2 parts saltpetre 1 part’, sulphate salts and potassium nitrate being two alchemical ‘keys’ used to unlock the hidden properties of minerals and to precipitate organic materials in the preparation of ‘colours’ (dyes and artists’ pigments). The second anonymous hand recommends “Catsonella” – 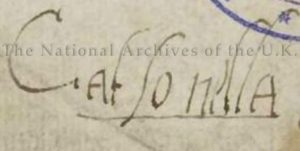 I presume Catenella caespitosa, a dark purple moss-like seaweed found on rocky coastlines in the United Kingdom and Ireland – as giving an “exelent cooler of scarlett” at the bottom of fo. 169 verso. And so these State Papers both begin and end with the transformation of natural ingredients into different substances, as per the Chancery ink recipe.

All this is Alchemy as proto-chemistry and philosophy. The Philosopher’s Stone is another story…