To celebrate tonight’s Full “Red Moon”, I pre-ordered another alchemically themed document to view in the Map and Large Document Reading Room of The National Archives at Kew, which recounts the misfortunes of a Practitioner claiming to have made an elixir with the power to transform base materials into Silver. Filed within TNA’s Special Collections sub-series “Petitions to the Chancellor in his Executive Capacity”, it represents this hapless Alchemist’s plea to be released from Newgate Prison, where he was imprisoned through the machinations of a London Spicer conspiring to extract the secrets of his craft – along with a substantial sum of money – in 1337.

The Discovery Catalogue’s detailed item description offers the extremely helpful advice that a full transcription and translation of this petition are provided in Select Cases in Chancery A.D. 1364 to 1471. Having the benefit of digital photo-editing and magnification tools – not to mention the superb free resource of The Anglo-Norman On-Line Hub – my reading differs slightly, so I am including it below.

To the Chancellor of our Lord the King. Prayeth Thomas of York, that since he knows how to work by the science of Alchemy, & to make silver in plate, & has done so in (the) presence of

good people of London, and the silver assayed by the goldsmiths of the same City, & found good, there is come one Thomas Crop of London, Spicer, & himself

made intimate to the said Thomas of York, in so much that he caused him to carry to his house his instruments & his elixir, & caused him to work in his house before him,

City, imprisoned the said Thomas of York in the house [of] the said Thomas Corp [sic.] in London, and there caused him to draw up one (bond of) obligation for 100 marks, due,

therefore, to render payment to the said Thomas Crop, & afterwards one other obligation for as much of the same form, And thus by virtue of these bonds, here upon,

the said Thomas Corp [sic.] proceeded to seize the said Thomas of York & to imprison him in Newgate, and withholds from him his elixir & his other instruments &

other goods & chattels to the amount of 40 pounds, wherefore the said Thomas of York prays for God that he will be pleased to decree for his deliverance, &

to cause the said Thomas Crop to come with the elixir and the instruments afore-said, so that he should be able to work [&] to prove his science before them, or others

whom it may please the King to assign, & that the false obligations should be able to be annulled. 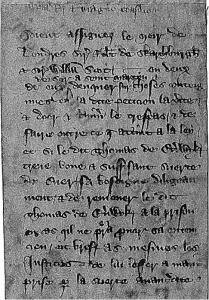 Cora[m] R[ege] & Magno Consilio.
Before the King & the Great Council.

Soient assignez le Meir de
Be appointed: the Mayor of

faire outre ce q[ue] at[t]eint a la ley
do furthermore that which determines (guilt or innocence) according to the law;

cion eit bref as mesmes les
plaint, implement (a) writ to the same

The catalogue description also notes that “CPR 1334-8 pp.445-6 is dated 3 April 1337, and is clearly in response to this petition”. This Calendar of Patent Rolls entry largely repeats the same account, but does add some extra detail, in addition to confirming that Thomas of York’s Petition to be heard was successful:

MEMBRANE 20d.  [Patent Rolls, 11 Edward III – Part I]
April 3 [1337]. Westminster.
Commission of oyer and terminer to John de Pulteneye, mayor of
London, Robert de Scardeburgh and William Scot, on complaint by Thomas
de Eboraco that, whereas he by the science of alchymy had forged silver
plates and had them proved by goldsmiths and others of the city of London,
one Thomas Corp of London, ‘spicer,’ and others plotting to disturb him
maliciously took him by night at the said city and brought him to the house
of the said Thomas Corp there, and made him bring with him an elixir
(quoddam elixerium) and some other instruments wherewith he made such
silver, and to compel him to teach them the art, imprisoned him there
until through fear of death he forged silver by his art in their sight, and
made two bonds to the said Thomas in 100l. each, and carried away the
elixir and instruments with other goods, and that they afterwards, by
pretext of the bonds, although he was never bailiff of the said Thomas
Corp or receiver of any of his moneys, before the mayor and sheriffs of
the city they called him to account before auditors appointed for this for
the sums in the bonds and arrears and procured him to be adjudged to
Newegate gaol until he satisfied him of these, whereby he has been long
and still remains in the said gaol.     By pet. of C., and by fine of 1/2 mark. 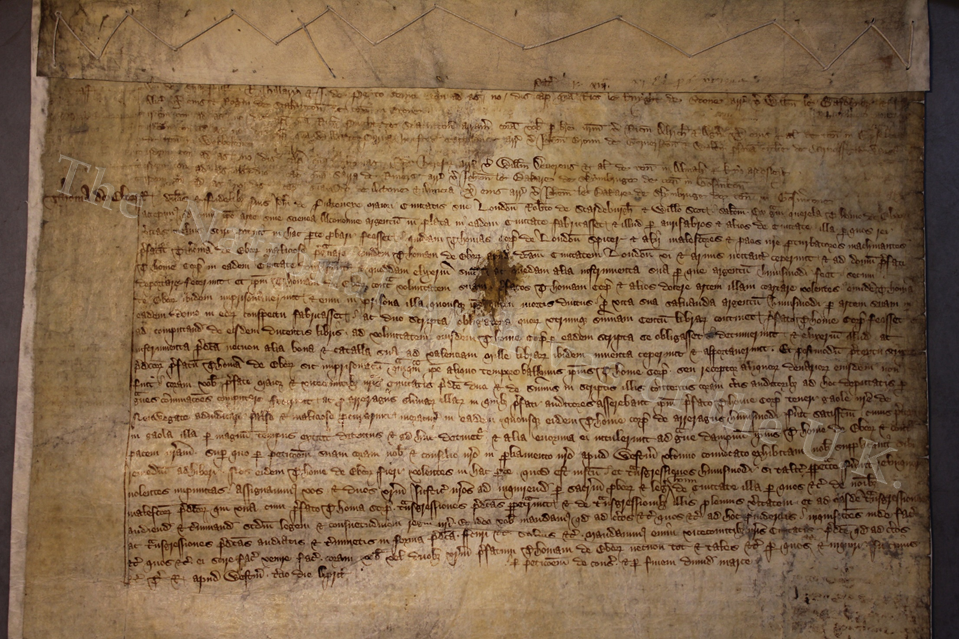 Unfortunately, the surviving records for Newgate Prison date from 1423 onward, and City of London Sessions of Oyer and Terminer files from 1568, so the outcome of this hearing remains unknown.

However, there may just be a record filed amongst Chancery Certificates of Statute Merchant and Statute Staple which could move the story forward at a future visit to TNA …

Want to read more? Click here for Minions of the Moon, part 2