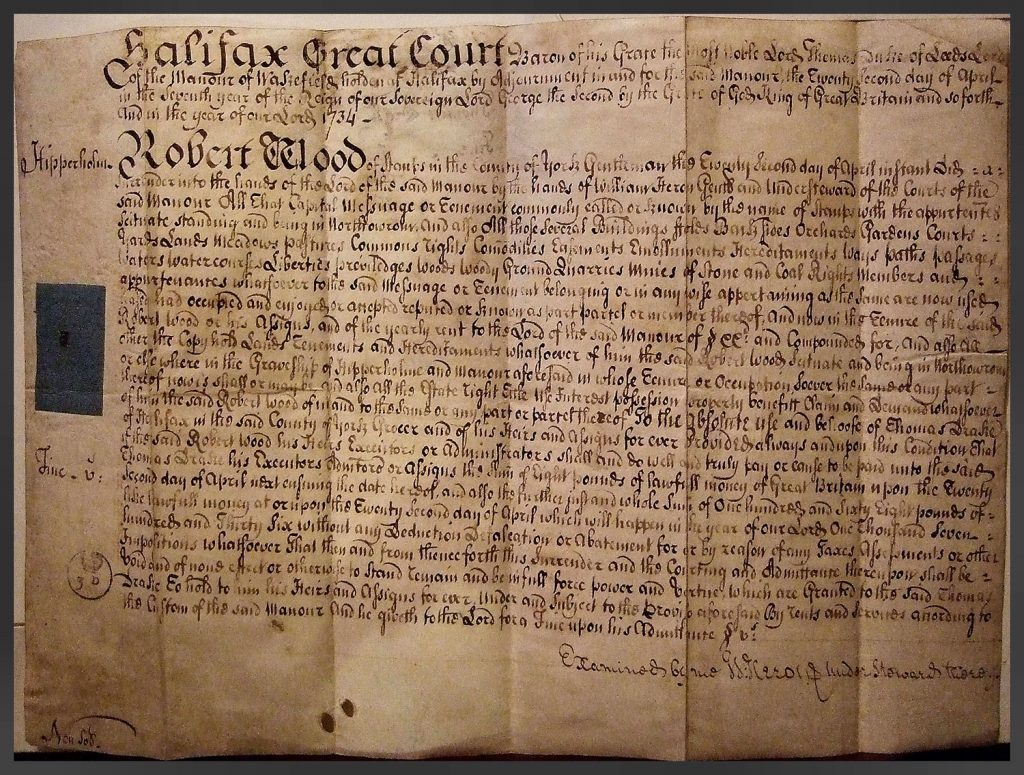 1. Halifax Great Court Baron of his Grace the Most Noble Lord Thomas Duke of Leeds Lord

2. of the Manour of Wakefield holden at Halifax by Adjournment in and for the said Manour, the Twenty Second day of April

3. in the Seventh year of the Reign of our Sovereign Lord George the Second by the Grace of God King of Great Britain and so forth

5. [left margin, contiguous with the transcribed line which follows:]  Hipperholm ~

5. Robert Wood of Staups in the County of York Gentleman the Twenty Second day of April instant Did

6. Surrender into the hands of the Lord of the said Manour by the hands of William Heron Gentl[eman] and Understeward of the Courts of the

7. said Manour All That Capital Messuage or Tenement commonly called or known by the name of Staups with the appurten[an]ces

8. Scituate standing and being in Northowrom, And also All those Several Buildings Folds Banksides Orchards Gardens Courts

11. appurtenances whatsoever to the said Messuage or Tenement belonging or in any wise appertaining as the Same are now used

12. leased had occupied and enjoyed or accepted reputed or known as part parcel or member thereof, And now in the Tenure of the said

13. Robert Wood or his Assigns, and of the yearly rent to the Lord of the said Manour of § xxd: [i.e. 20 pence] and Compounded for, And also All

14. other the Copyhold Lands Tenements and Hereditaments whatsoever of him the said Robert Wood Scituate and being in Northowrom

15. or elsewhere in the Graveship of Hipperholme and Manour aforesaid in whose Tenure or Occupation Soever the Same or any part

16. thereof now is shall or may be, and also All the Estate Right Title Use Interest possession property benefitt Claim and Demand whatsoever

17. of him the said Robert Wood of in and to the Same or any part or parcel thereof To the Absolute Use and behoofe of Thomas Drake

18. of Halifax in the said County of Yorks[hire] Grocer and of his Heirs and Assigns for ever Provided always and upon this Condition That

19. if the said Robert Wood his Heirs Executors or Administrators shall and do well and truly pay or cause to be paid unto the said

20. Thomas Drake his Executors Adm[inistra]tors or Assigns the Sum of Eight pounds of lawfull money of Great Britain upon the Twenty

21. [left margin, contiguous with the transcribed line which follows:]  Fine ~ vs: [i.e. 5 shillings]

21. Second day of April next ensuing the date hereof, and also the further just and whole Sum of One hundred and Sixty Eight pounds of

22. like lawfull money at or upon the Twenty Second day of April which will happen in the year of our Lord One Thousand Seven

23. hundred and Thirty Six without any Deduction Detaleation or Abatement for or by reason of any Taxes Assessments or other

24. Impositions whatsoever That then and from thenceforth this Surrender and the Courting and Admittance thereupon shall be

25. void and of none effect or otherwise to Stand Remain and be in full force power and vertue, which are Granted to the said Thomas

26. Drake To hold to him his Heirs and Assigns for ever, Under and Subject to the Proviso aforesaid By Rents and Services according to

27. the Custom of the said Manour And he giveth to the Lord for a Fine upon his Admittance § vs: [i.e. 5 shillings]