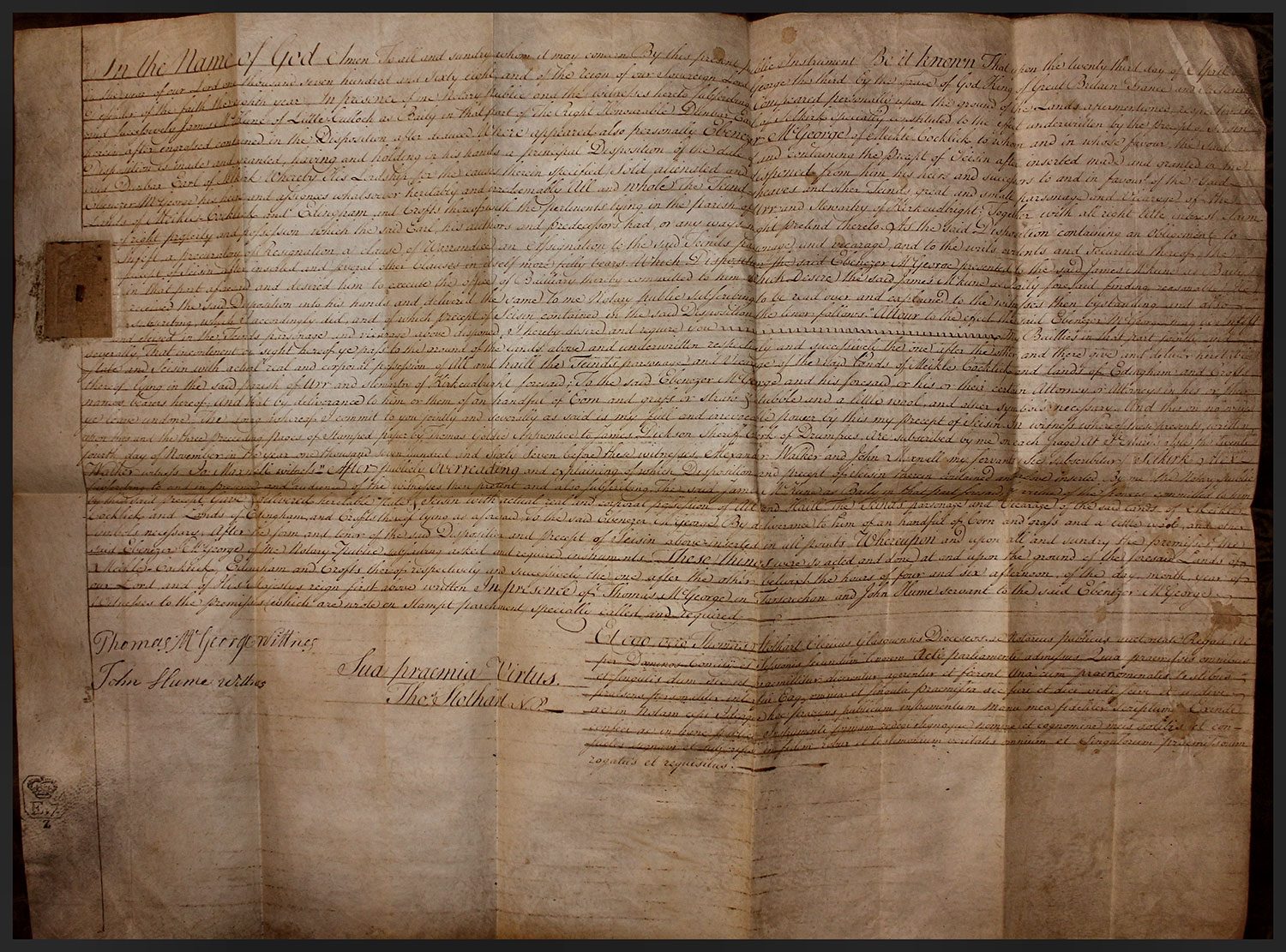 1. In the Name of God Amen To all and sundry whom it may concern By this present public Instrument  Be it Known That upon the twenty third day of April

2. in the year of our Lord one thousand seven hundred and Sixty eight and of the reign of our Sovereign Lord George the third by the grace of God King of Great Britain France and Ireland

3. Defender of the faith the eighth year  In Presence of me Notary Public and the witnesses hereto subscribing Compeared personally upon the ground of the Lands aftermentioned respectively

4. and successively James McKune of Little Culloch as Baily in that part of the Right Honourable Dunbar Earl of Selkirk specially constituted to the effect underwritten by the Precept of Seisin

5. herein after engrossed contained in the Disposition after deduced Where appeared also personally Ebenezer McGeorge of Meikle Cocklick to whom and in whose favour the said

7. said Dunbar Earl of Selkirk Whereby His Lordship for the causes therein specified Sold alienated and disponed from him his heirs and successors to and in favour of the said

8. Ebenezer McGeorge his heirs and assignees whatsoever heritably and irredeemably All and whole The Teind sheaves and other Teinds great and small parsonage and Vicarage of the

9. Lands of Meikle Cocklick and Edingham and Crofts thereof with the pertinents lying in the Parish of Urr and Stewartry of Kirkcudbright; Together with all right title interest claim

10. of right property and possession which the said Earl, his authors and predecessors had, or any ways might pretend thereto As the said Disposition containing an Obligement to

11. Infeft a Procuratory of Resignation a clause of Warrandice an Assignation to the said Teinds parsonage and vicarage and to the writs evidents and securities thereof the

12. Precept of Seisin after inserted and several other Clauses in itself more fully bears Which Disposition the said Ebenezer McGeorge presented to the said James McKune as Baily

13. in that part aforesaid and desired him to execute the office of Bailliary thereby committed to him which Desire the said James McKune as Baily foresaid finding reasonable He

14. received the said Disposition into his hands and delivered the same to me Notary Public Subscribing to be read over and explained to the witnesses then bystanding and also

15. subscribing, which I accordingly did, and of which Precept of Seisin contained in the said Disposition the tenor follows “Attour to the effect the said Ebenezer McGeorge may be Infeft

17. severally, That incontinent on sight hereof ye pass to the ground of the lands above and underwritten respectively and successively the one after the other, and there give and deliver heretable

18. state and Seisin with actual real and corporal possession of All and haill the Teinds parsonage and Vicarage of the said lands of Meikle Cocklick and lands of Edingham and Crofts

19. thereof lying in the said Parish of Urr and Stewartry of Kirkcudbright foresaid; To the said Ebenezer McGeorge and his foresaid or his or their certain Attorney or Attorneys in his or their

20. names bearers hereof; And that by deliverance to him or them of an handful of Corn and grass or straw & stubble and a little wool, and other symbols necessary And this on no ways

21. ye leave undone The doing whereof I commit to you jointly and severally as said is my full and irrevocable power by this my Precept of Seisin. In witness whereof these presents written

22. upon this and the three Preceeding Pages of Stamped Paper by Thomas Goldie Apprentice to James Dickson Sheriff Clerk of Drumfries are subscribed by me on each page at St Mary’s Isle this twenty

23. fourth day of November in the year one thousand seven hundred and Sixty Seven before these witnesses Alexander Walker and John Maxwell my servants Sic subscribitur* Selkirk Alex[ande]r

24. Walker witness Jo: Maxwell witness” After publicly overreading and explaining of which Disposition and Precept of Seisin therein contained and above inserted By me the Notary Public

25. Subscribing to and in presence and audience of the witnesses then present and also subscribing The said James McKune as Baily in that part foresaid, by virtue of the powers committed to him

26. by the said Precept Gave & delivered heretable state & Seisin with actual real and corporal possession of All and Haill The Teinds parsonage and Vicarage of the said lands of Meikle

27. Cocklick and Lands of Edingham and Crofts thereof lying as aforesaid To the said Ebenezer McGeorge By deliverance to him of a handful of Corn and grass and a little wool, and other

28. symbols necessary After the form and tenor of the said Disposition and Precept of Seisin above-inserted in all points Whereupon and upon all and sundry the premisses the

29. said Ebenezer McGeorge of Me Notary Public subscribing asked and required instruments These things were so acted and done at and upon the ground of the foresaid Lands of

30. Meikle Cocklick Edingham and Crofts thereof respectively and successively the one after the other betwixt the hours of four and six afternoon of the day month year of

31. our Lord and of His Majestys reign first above written In presence of Thomas McGeorge in Tarscrechan and John Hume servant to the said Ebenezer McGeorge

32. Witnesses to the premisses (which are wrote on Stampt Parchment specially called and required

And I, truly, Thomas Stothart, Clerk of the Glasgow Diocese and Notary Public (by) Royal authority, And

by the Lords of Council and Session, according to the tenor of the Act of Parliament, admitted, Whereas (at) the premisses, all

and singular, while just as is put forward, said, conducted, and done, Together with the afore-named witnesses,

Virtue (is) Its own reward.

I have been personally present, and the Same all and singular premises thus to be done and said I have seen, known, and heard,

and have taken in Notation, and Therefore this present public instrument, (by) my hand faithfully written, Thereupon

I have composed, and in this form of Public Instrument I have rendered and have signed (with) my name and surname, customary and ac-

customed, I have sealed and subscribed in faith, strength, and testimony of the truth of all and Singular the premisses,

Of The Teinds of

2. Betwixt the hours of one and two afternoon the Sasine withinwritten

3. was Presented by Thomas Stothart writer in Drumfries And is duly Regis:

5. Particular Register of Sasines Reversions &c Kept for the Shire of

7. Act of Parliament by me John Clark writer in Drumfries Clerk to &

8. Keeper of the said Register