There are two ‘truths’ universally acknowledged in pedigrees of the Gunnings Bedford: that there were five early members of the family who shared the distinctive given name Gunning – the latter three figures of some consequence in the physical building and political development of the American Congress during the 18th century, “Gunning Jr.” having been one of the signatories of the U.S. Constitution – and that all lines lead back to emigrant ancestor William Bedford (1600-1670), who sailed from Southampton to Virginia in 1621.

The Family Tree which follows summarises what has become the accepted lineage; its first part – running from William through “Gunning II” – is not backed up by any evidentiary original documents that I have been able to discover, with the exception of those proving William’s emigration to Virginia and continued residence there, and the line (not depicted below) which descends from his grandson Thomas of Virginia (1660-1751). For the children of “Gunning II”, who led lives of national significance, there is an historical paper trail to confirm events and identifications as recorded in the second part. It is “Gunning I” and “Gunning II” who pose a problem, the solution to which is suggested by their coincidentally sharing the death year 1724: 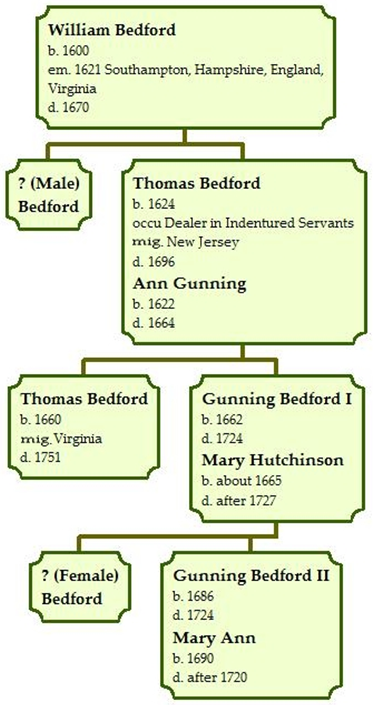 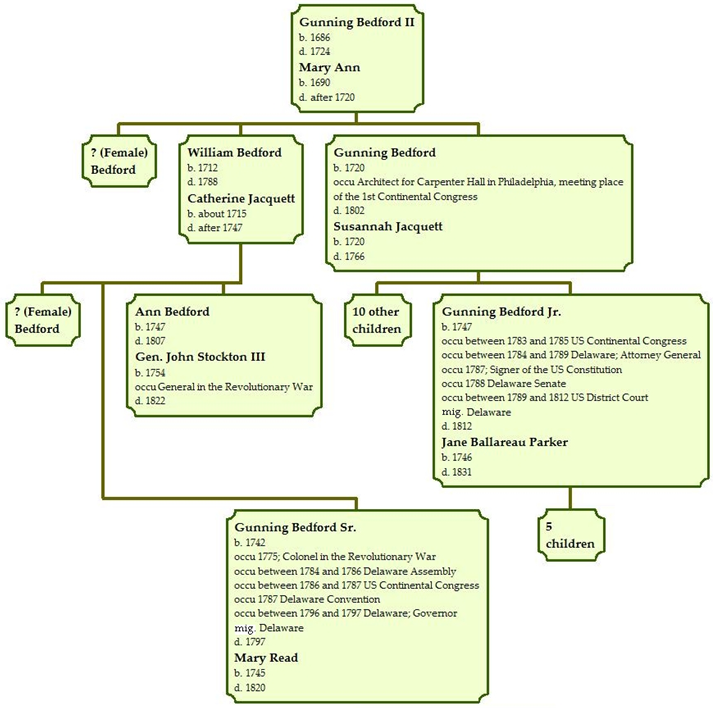 Gunning Bedford, father of his namesake son, the Architect for Carpenter Hall in Philadelphia, did indeed die in 1724 – Old Style dating, 1725 New – leaving a widow Mary. She was granted a Bond as administratrix of the estate of her husband, who had not left a will; it is dated 02 February 1724/5, with Gunning (recorded in brackets as bearing the spelling variants Gunnion and Gunian) described as being of Pens Neck [sic.], Salem Co., yeoman.* Receipts and accounts filed under the name of administratrix Mary Bedford, gentlewoman, value Gunning’s estate at £19.13, including a silver tumbler worth £2.10; they continue through to 07 January 1726/7,** corresponding with the death date “after 1727” entered for Mary (Hutchinson) Bedford, wife of “Gunning I”. Contemporary English records reveal that “Gunning II” should be excised from the tree, with “Gunning I” himself being the emigrant ancestor, unconnected to William Bedford of Virginia and his descendant line of Thomases. Freed from this incorrect ancestry, his lineage may be traced back through multiple county migrations in England to a Northamptonshire cleric named Aman (also spelled Amand and Amon) Bedford, described in the Inquisition Post Mortem of his brother Amos, a Lincolnshire cleric, as “being of the age of sixty years & more” at the time of Amos’ death on 22 September 1616, suggesting a birth year of circa 1556.

The Diocese of London Ordination Register entry for Amos Bedford “master of arts” [LMA DL/A/B/001/MS09535/002, f.10], dated 21 December 1579 (like the Inquisition, written in Latin), notes that he was “now of Ratcliffe in the County / of Middlesex, born at Buckland in the County of Hertford / of the age of 27 years : or about”, suggesting a birth year of circa 1552, and providing the earliest date and location associated with this Bedford line confirmed to date.

“Gunning the Sonne of William / Bedford Rector of Witton & Jane / his wife was christened ^in the Church of Whitton^ May 5th 1678”, according to the Parish Register of Whitton, Suffolk, England. Although the date for his emigration to New Jersey has not yet been discovered, probate documents narrow the window to between 06 November 1695, when his father’s cousin once removed, Thomas Bedford of Doctor’s Commons, London, made his Last Will and Testament (proved in the Prerogative Court of Canterbury on 05 October 1698), bequeathing “a piece of Plate of five pounds to each of these my Godchildren”, the list beginning with “Guning Bedford”, and 01 June 1712, when his father “William Bedford Vicar of Stradbrooke”, Suffolk, made his own will (proved in the Prerogative Court of Canterbury on 02 July 1713):

“As for my eldest Son Gun[n]ing Bedford I / having been at great Charges in his Education and Voyages in / America I Order Him only more one Hundred and ffourteen Pounds / to be paid partly out of the two Præmiums that will be due at my / death out of the Office of Assurance for Widows and Orphans and what / his part shall fall short there to be made up out of the Sale of my House / in Hosier Lane in Yorke … and whatsoever Overplus / there shall be out of that my two eldest Sons to have each of them Three / Pounds Six Shillings and Eight pence to pay them for the Outside of their / Mourning … and my other Legacy I have given her [his wife Susannah] out of / my personall Estate what my eldest Son Gun[n]ing desireth me to / pay from this day shall if paid be deducted out of the Hundred and / ffourteen Pounds here ordered and what may remaine if he dyes / unmarried and Assignd [sic.] not away shall be divided amongst the residue / of my Children … I give unto [son] William the white Enameled on gold ring I now wear / and leave with him for my Son Gun[n]ing my late Lord of Elye ffunerall / Ring and his Mothers picture drawne by the life upon a Copper Plate / to be given to him if ever they meet … my / Executors are to deliver unto Gun[n]ing my large peice of Silver / Plate (the Gift of his Godfather Mr: Thomas Bedford) Provided that / he pay ffive Pounds which I have disbursed for him upon it / unless I Order it otherwise hereafter …”

Want to read more? Click here for Too Many Gunnings, part 2