According to the Parish Register of York St Crux, Gunning Bedford’s father “Willm, the sonne of Thomas Bedford,” was christened “the ixth of November” 1653. His marriage to first wife Jane, whose maiden name may have inspired the given name with which their eldest known child Gunning was baptised, has not yet been discovered. Two further children were born, daughter Anthonina (1680-1705) in Whitton – its Parish Register notes the Rector as “being Non Resident from the 18th of May 1681” –  and son Thomas (1682-1682) in Stradbroke,* before Jane Bedford was buried on 30 October 1682 at Stradbroke All Saints. William married Susanna Shreeve on 06 July 1685 in the same church, by whom he had five sons and two daughters. In addition to his clerical duties, he published sermons,** and wrote an account of the sequestration of his grandfather, Durham-based cleric Thomas Bedford, during the English Civil War.*** “Bedford, Mr William, Vicar,” was buried on 13 June 1713, and “Bedford, Mrs Susannah, wid. 16 Apr.” 1718, both at Stradbroke All Saints,* their son William having succeeded his father there in 1713. 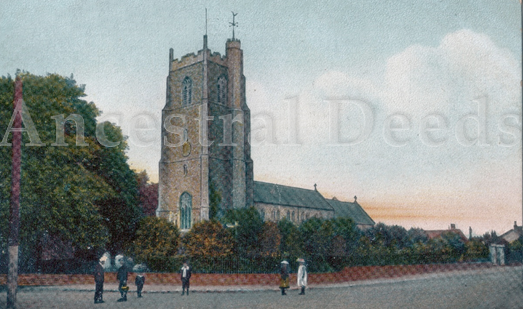 Gunning’s grandfather Thomas, “s. Mr. Thomas Bedford and Alc., h.w.”, was christened on 03 December 1623, at Thomas senior’s church, Bishop Middleham St Michael, Durham. On 29 May 1650, Thomas senior recorded that “My son Thomas Bedford maryed at York” (frustratingly, not including the bride’s name), where Thomas junior worked as a Merchant – among the list of Freemen of York for 1651, “not by patrimony”, appears the entry “Thomas Bedforth, haberdasher” – as did his brother Aman (also spelled Haman, Amon, Amond, Amand, and Almond) in London, where “Amen Bedford” was enrolled in The Draper’s Company, bound as an Apprentice in 1641 and later making frequent appearances in the records of the Protectorate’s Committee for Compounding with Delinquents.**** Seven of Thomas’ children were christened at York St Crux (six not surviving), with an eighth – unnamed, presumed stillborn – buried there as an infant. While his marriage has not been discovered in York Parish Registers, “Jane, wife of Thomas Bedford” was buried at St Crux on 27 September 1676, and the Parish Register of Bishop Middleham St Michael records the burial of Thomas Bedford on 24 April 1674. His name is included in the Memorial Inscription which once hung in the family church, now surviving only in transcript form:

“Up to the time of the restoration of the church there existed, to the north of the altar, a wooden tablet, on which was the following inscription: —
“Thomas Bedford, Vicar of Bishop Middleham, departed this life Sept. 1660, aged 72, who married Alice, the daughter of Bryan Frizell, and had by her Aman, Robert, Thomas, and John, Elizabeth, Alice, Mary, and Bridget. Alice, the relict of Thomas Bedford, departed this life in October, 1680, aged 74 years.  She was mother, grandmother, and great grandmother to seventy-four children, besides embrios.”
This tablet has disappeared.  The inscription is preserved in Surtees’ History of Durham.”*****

Elizabeth, above-named,  married John Hutcheson (also spelled Hutchinson) on 11 September 1638 at Bishop Middleham St Michael; their sons Ralph and Robert emigrated to America, maintaining ties with their merchant Bedford relatives in England. In his will, dated 16 February 1679/80, Ralph Hutchinson of Newcastle, Delaware, writes “… Item I: give unto amond bedford six oyled skins that are in my Chest, and also I: give and bequeath unto my unkle John bedford fower thousand pounds of Tobbacco; and my Plantation att Christeen Creeke if not sould to my sisters use if the debts bee sattisfyed wth ye other Consernes …”. The will of Robert Hutchinson, of the County of New Castle on Delaware, yeoman (a generation younger than the above testator Ralph), dated 11 April 1717 and proved on 03 May of the same year, names one of his sisters as Mary Hutcheson, and appoints his mother Margaret Hutcheson, brother-in-law John Richeson (husband of his sister Hannah) and “my Cousine and friend, Gunning Bedford” as his Executors, also mentioning Gunning’s son William Bedford.

Although no marriage record for Gunning has yet been discovered, either in England or America, it is intriguing that the tree on the first page of this article names the wife of “Gunning I” as Mary Hutchinson, perhaps an indicator of her true identity, although it remains possible that the identification has been erroneously accepted through a confusion with his second-cousin, who was still unmarried in 1717. In either event, it is evident that Gunning emigrated to a part of the New World which was already home to ‘close kin’.

Want to read more? Click here for Too Many Gunnings, part 3