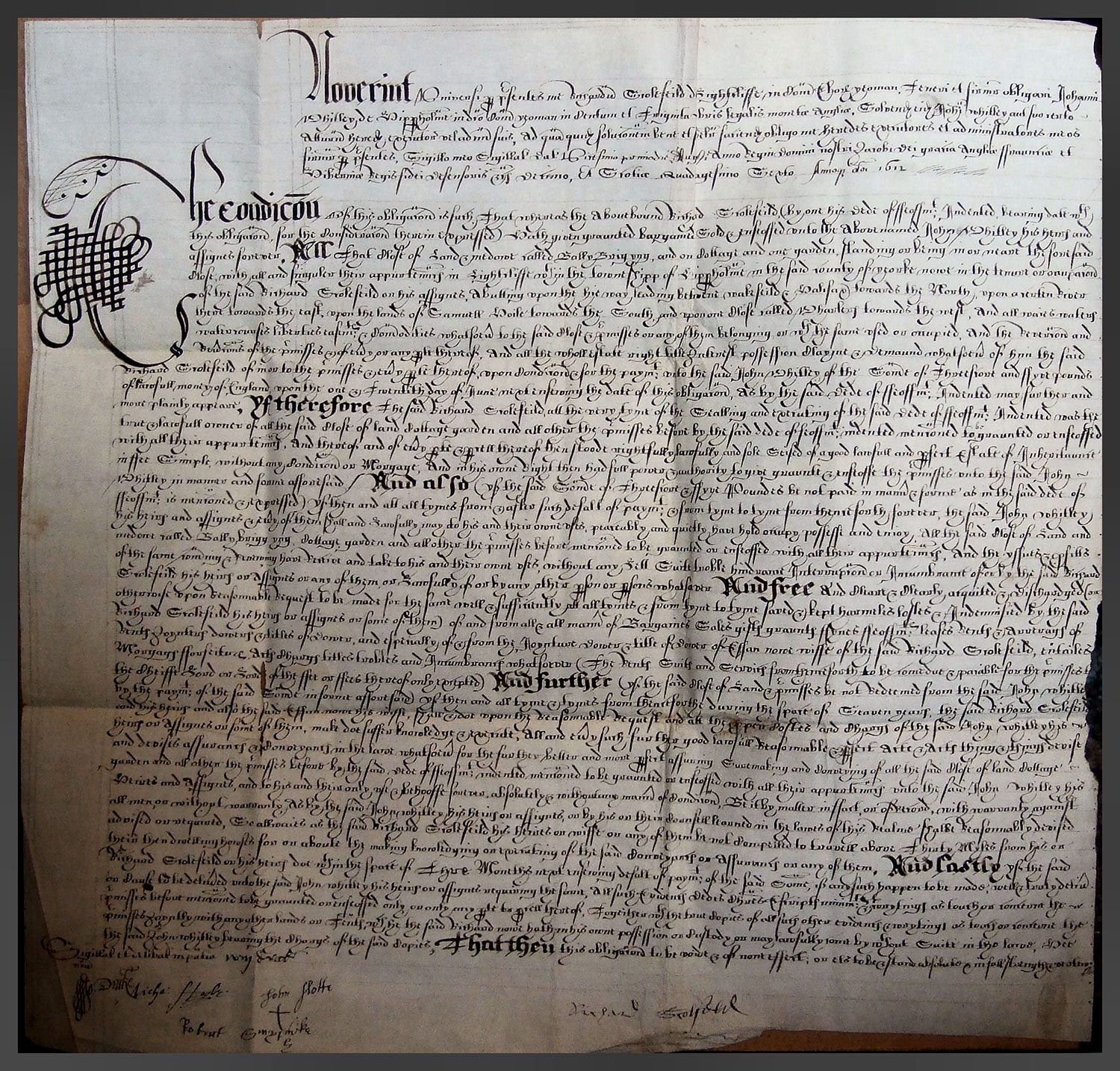 Know All men by (these) presents myself, Richard Scolefeild of Lightcliffe in the County of York, yeoman, To be Held and firmly bound (to) John

Whitley of Hipperholme in the said County, yeoman, in One Hundred and Thirty Pounds of lawful money of England, To be Paid (to) the same John Whitley, or (to) his certain

firmly by (these) presents; Sealed (with) my Seal. Given (on) the Twentieth (&) first day of August (in) the Year of the Reign of our Lord James, (by) the grace of God of England, France, and

Ireland the King, Defender of the faith, etc., the Tenth, And of Scotland the Fortieth (&) Sixth, and the Year of god 1612.

7. this obligac[i]on, for the Considerac[i]on therein expressed) Hath given graunted bargained Sold & enfeoffed unto the Abovenamed John Whitley his heirs and

8. assignes forever, All That Close of Land & medowe called Bally Brig yng, and one Cottage and one garden, standing or being in or neare the foresaid

10. of the said Richard Scolefeild or his assignes, Abutting upon the hie way leading betwene Wakefeild & Halifax towards the North, upon a certen River

11. there towards the east, upon the lands of Samuell Hoile towards the South, and upon one Close called Wharlers towards the west, And all waies waters

15. of lawfull money of England upon the one & Twentith day of June next ensewing the date of this obligac[i]on, As by the said Dede of Feoffm[en]t: Indented may further and

16. more plainly appeare, Yf therefore The said Richard Scolefeild, all the very tyme of the Sealling and executing of the said Dede of Feoffm[en]t: Indented was the

17. true & lawfull owner of all the said Close of land Cottage garden and all other the p[re]misses before by the said dede of feoffm[en]t: indented menc[i]oned to ^be^ graunted or enfeoffed

19. in Fee Simple, without any Condic[i]on or Morgage, And in his owne Right then had full power & authority to give graunte & enfeoffe the p[re]misses unto the said John

20. Whitley in manner and forme afforesaid And also (yf the said Som[m]e of Threescore & Fyve Poundes be not paid in mann[er] & forme as in the said dede of

21. Feoffm[en]t: is menc[i]oned & expressed) yf then and att all tymes from & after such defalt of paym[en]t: & from tyme to tyme from thenceforth forever, the said John Whitley

22. his heirs and assignes & ev[er]y of them shall and Lawfully may do his and their owne uses, peaceably and quietly have hold occupy possesse and enioy, All the said Close of Land and

24. of the same com[m]ing & Renewing have Receive and take to his and their owne uses, without any Lett Suite troble hindrance Interrupc[i]on or Incumbrance of or by the said Richard

25. Scolefeild his heirs or Assignes or any of them, or Lawfully of or by any other p[er]son or p[er]sons whatsoever And free And Cleare & Clearly acquited & Dischardged (or

26. otherwise upon Reasonnable Request to be made for the same well & sufficiently att all tymes & from tyme to tyme saved & kept harmeles lostes [sic.] & Indemnified by the said

27. Richard Scolefeild his heirs or assignes or some of them) of and from all & all mann[er] of Bargaines Sales gifts graunts Fynes Feoffm[en]ts: leases Rents & Avverag[e]s of

28. Rents Joynters dowers & titles of Dower, and especially of & from the Joynture Dower & title of Dower of Effan nowe wiffe of the said Richard Scolefeild, entailes

30. the Cheiffe Lord or Lord[s – page torn at fold-line] of the Fee or Fees thereof only excepted) And further (yf the said Close of Land & p[re]misses be not Redeemed from the said John Whitle[y]

31. by the paym[en]t: of the said Som[m]e in forme afforesaid) yf then and all tyme & tymes from thenceforthe during the space of Seaven years the said Richard Scolefeil[d]

32. and his heirs and also the said Effan nowe his wiffe, shall & doe upon the Reasonnable Request and att the p[ro]per Costes and Charg[e]s of the said John Whitley his

33. heirs or Assignes or some of them, make doe suffer knowledge & execute, All and ev[er]y such further good lawfull Reasonnable & p[er]fect Acte & Acts thing & things devise

34. and devises assuranc[e]s & Conveyanc[e]s in the lawe whatsoev[er] for the further better and more p[er]fect assuring Suremaking and Conveying of all the said Close of land Cottage

35. garden and all other the p[re]misses before by the said Dede of Feoffm[en]t: indented menc[i]oned to be graunted or enfeoffed with all their appurten[au]nc[e]s unto the said John Whitley his

36. Heires and Assignes, and to his and their only use & behooffe forever, absolutely & without any mann[er] of Condic[i]on, Be it by matter in Fact, or of Record, with warranty against

37. all men, or without warranty, As by the said John Whitley his heirs or assignes, or by his or their Counsell learned in the lawes of this Realme shalbe Reasonnably devised

38. advised or required, So allwaies as the said Richard Scolefeild his heires or wiffe or any of them be not Compelled to travel above Thirty Myles from his or

39. their then dwelling howses for or aboute the making knowledging or executing of the said Conveyanc[e]s or Assuranc[e]s or any of them, And lastly yf the said

41. or Cause to be deliv[er]ed unto the said John Whitley his heirs or assignes requiring the same, All such Evidenc[e]s Dedes Ch[a]r[g]es of scripts minim[en]ts: & wrytings as touch or concerne the

43. p[re]misses Joyntly with any other lands or Ten[emen]ts: w[hi]ch he the said Richard nowe hath in his owne possession or Custody or may lawfully come by w[i]thout Suite in the lawe, Hee

44. the said John Whitley bearing the Charg[e]s of the said Copies, That then this obligac[i]on to be voide & of none effect, or els to be & stand absolute & in full strength & vertew

(Land & house at Highcliff
in Hipperhome.
During the reign of King James 1ST)