The extensive will of Gunning Bedford’s great-great grandfather Aman Bedford, dated 10 March 1639/40 (proved in the Prerogative Court of Canterbury on 09 February 1640/41), offers no further clues to his ancestry, other than the mention of sisters Coleman and Joane Bateman, who have not been accounted for among the surnames of known in-laws. Gunning Bedford’s ancestral line ends with Aman, for the present. 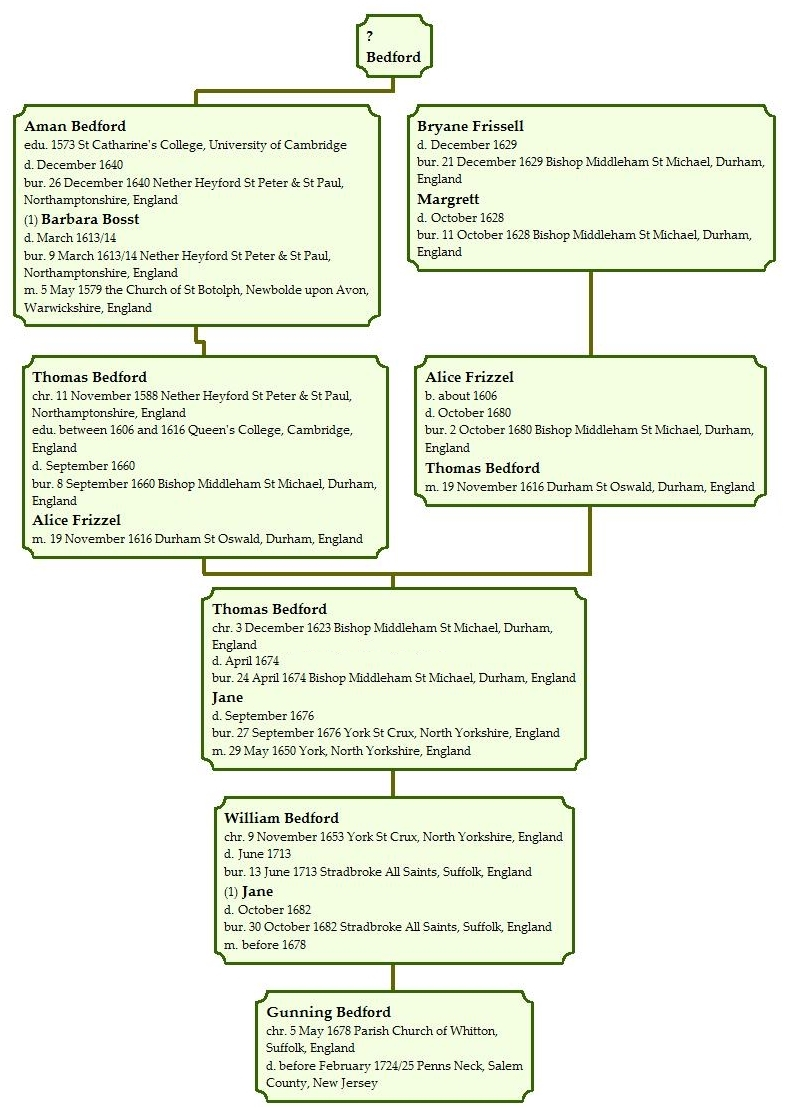 Neither sharing kinship with his line, nor an American heritage, I have confirmed Gunning Bedford’s correct lineage as an off-shoot of my interest in his great-uncle Robert Bedford (son of Thomas, vicar of Bishop Middleham), itself stemming from my undergraduate study of English Drama before 1642 (the closing of Theatres at the start of the Civil War), with the end of Robert’s life bearing a startling resemblance to the historic murder of a Kentish landowner by his wife and her lover in 1551, depicted in the tragedy Arden of Faversham,* written circa 1590. A merchant, like his brothers Thomas in York and Aman in London, Robert migrated to pursue the family occupation ‘north of the border’, in Midlothian, marrying “Margrett Humleton … in / Scotland” on 13 December 1653, according to his father’s Register. Old Parochial Baptism entries for the Parish Church of South Leith record five sons – Thomas (b. 1654), John (b. 1656), Samuel (b. 1660), Robert (b. 1662), and Charles (b. 1664) – their surname consistently spelled as Bedfoord(e), their mother’s maiden name as Hamiltoun(e). (Robert’s brother Thomas’ surname was also spelled as Bedfoord between 1651 and 1653 in The Parish Register of St. Crux.) The latter three christenings were witnessed by a “merchand”  variously named as Geralld Theyere, Gellied Thyared, and Gilles Theyer, who became a lodger in the Bedfoord household, with catastrophic consequences.

Raised a Church of England Royalist, Robert had signed the petition presented to General Monck circa 1655-56 to restore South Leith’s Parish Church to its ecclesiastic purpose, it having been comandeered by Cromwell’s forces after the battle of Dunbar, in September 1650. Margaret’s personal beliefs are unknown, but The Records of the Proceedings of the Justiciary Court, Edinburgh, 1661-1678 leave no doubt as to her profound unhappiness in the marriage, which propelled her to an act of tragic desperation:

Edinbr. 17 May 1665.
Advocatus against Margaret Hamilton, relict of Ro[ber]t Bed-
foord, Englishman, merchant in Leith, indyted for the crime
of Adultery committed during the marriage with Geills Tyrie,    Adultery and
Englishman, Surveyor in Leith, now prisoner in the Tolbooth    murder of her
of Edinbr in the years of God 1658 and 1659 and subsequent      husband.
years untill the decease of her Husband, or ane or other of the   Lybell.
days of the said years, within the dwelling-house of her hus-
band, and the better to palliate the crime under the colour of
Hospitality, the said Geills did take up his lodging in the said
Robert his house, and was there dieted, pretending he could
not be so well accomodated elsewhere.   And the severall con-
trivances of their converse and the places of the house are all
lybelled, and that the sd Geills did write into his Books a note
of the birth of these children which were his own and of the
death of such of them as deceast, and that the said Geills
having gone to London, she did entertain amorous cor-
respondence with him by Letters under borrowed names, and
having estranged her affection to her husband, she contrived
his Murder, and for that end employed a servant to buy
poison, and that having failed she did on a night lybelled,
bind his hands when he was in bed upon design to murder him
in his sleep, and that having also failed, she on another night
about 11 a clock at night when he was a bed with some of his
children, did surprise and cruelly murder and strangle him,

126                              JUDICIARY PROCEEDINGS                             [JUNE
and thereafter with the canon bullet that she used for breaking
of her coalls, did give him many deadly strokes upon the head
and thereby killed him outright, and to palliate the murder
she resolved to bury him soon after his decease, and if the
wound should be discovered, to give it out that he had it by a
fall on the stair, and did take off his bloody shirt and conceal
it in the cellar among the coalls, and put clean linnens upon
him, but the ffriends of the Defunct supposing he had died of
an apoplexic, would not suffer him to be soon buried but called
for Physicians and Chyrurgeons.  These are the substantiall
heads and circumstances of the Lybell.
My Lord Advocate declares that he insists not upon thir
quality of the murder under Trust and Parricide as distinct
Crimes but only as aggravations of the murder.
The Pannell after hearing of the Dittay read and her former
confessions, confesses with tears the Crimes of Adultery and
Murder thereinmentioned as the same is lybelled and circum-
stantiate, as also after the Assize were sworn, the bloody
cloath and the iron bullett were produced in her presence, and
she again confesses the crimes lybelled as they are circum-
stantiate.  As also there are two or three witnesses, viz. a
baillie in Leith and the Physicians and Chyrurgeons, who
declare de corpore delicti, that they saw Robert Bedfoord dead,
wounded as is lybelled; and that they saw some taits of hair
and other tokens which had been gifted to the Pannell by
Giells Tyrie, taken out of a little coffer in her custody.
The Assize finds her guilty of the said Crimes of Murder
and Adultery, whereupon she is sentenced to have her head
struck off on the last day of May instant.

So it was, that “Upone the laft day of Maij 1665” Margaret “wes execute at the Mercat Croce of Edinburgh, for murthering of hir awin [husband]”; Giles was initially incarcerated as an accessory, but by denying the murder, while admitting to adultery and the fathering of several of her children, he escaped both torture and the noose, receiving a sentence of “banishment”. These events, including the witness statements which declare “that they saw some teats of hair, and other tokens, which had been gifted to the pannel by Geills Tyre” are repeated in An Amazing Historical Account of the Belief in Witchcraft in Scotland; although the book in no way implies her to have been a witch, the resulting keyword association and the name of Margaret Hamilton itself, as shared by the actress who portrayed the Wicked Witch of the West in The Wizard of Oz, have regrettably combined to make it exceptionally challenging to research Margaret further using online resources.

I would be most grateful to hear from anyone who might be able to fill in missing entries – most notably the marriages of Gunning Bedford’s parents William and Jane and his grandfather Thomas, the parentage of his earliest established ancestor Aman, and the fate of Robert Bedfoord’s children.

Read Too Many Gunnings part 1 here

* Anonymous, Arden of Faversham, registered at the Stationers Company on 03 April 1592, and printed later in the same year by Edward White in London.