Thomas signed the Protestation in 1641, also acting as an officer for the Oath, and remained a committed Church of England clergyman during the Puritan Regime; he was ousted from his living by “intruder” John Brabant circa 1652, and restored as incumbent upon the Restoration in 1660. He did not live to enjoy his reinstatement for long, as the Parish Register records the burial of “Thomas Bedford, Clarke and Vicar of Bpp. Midelham” on 08 September 1660; his widow Alice was buried in the same place twenty years later, on 02 October 1680: “Alice Bedford wid. / Aff. before Coll. Tempest.” Their Memorial Inscription has already been cited; a second, on an altar-tomb in the Churchyard, reveals that the clergyman who had replaced him during the Protectorate became Thomas’ successor, here praised for teaching through the example of his life, as well as the words of his sermons:

A footnoted summary in Durham Protestations distils the events of Thomas senior’s life through the subsequent generation, confirming a suspected error in the York St Crux Register transcript, Jane Bedford having died the widow rather than wife of Thomas junior: 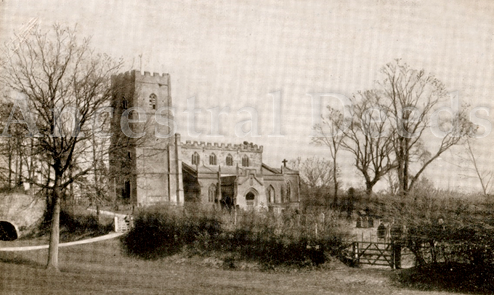 Their ten children were christened in the Parish Church of Nether Heyforde, St Peter and St Paul, between 1580 and 1595.* The first named John (b. 1593) was buried 14 January 1593/94; “John Bedforde the seconde of that name the sonne of Aman / Bedford clarke & parson of Heyford & Barbara his wyfe / was baptised the xix daye of Aprill” 1595. “Barbara Bedforde the wyfe of Aman Bedforde clarke & / parson of Heyford was buryed the 9th ^daye^ of Marche. / Regni regis Jacobi et. et. Duodecimo” (1613/14), and in 1623 “Aman Bedforde parson of Heyforde & Marye Walker of Daventrie / were marryed the xviijth daye of December” (a second marriage for both bride and groom). Marye made her will on 26 March 1624 (proved in the Prerogative Court of Canterbury on 04 May 1625), “by the lycence and full / consent and according to the power before marriag to mee reserved from my said husband”, who witnessed the will. Its legacies favour her blood relatives, with only token bequests made to Aman, his son John (“halfe a dozen of holland table napkins”, and daughter Bridget (“my wedding Smocke”). “Marye Bedforde the wyfe of Aman Bedforde clarke & / parson of Heyforde was buryed the seconde daye of Marche. beinge ashwednesdaye” in 1624/25 in Nether Heyforde. Her husband survived her by more than fifteen years, dying in 1640: “Aman Bedford, Clericus, (quondam Rector Eccl[es]ie de / Heiford) sepult[us] fuit, Decembr[is]. 26”, son John having already succeeded him as vicar there; the Parish Register* confirms what is supposed in the latter’s Alumni Cantabrigienses entry: “John Bedford Matric. sizar from PETERHOUSE, Michs. 1611. S. of Amand (1573), clerk. B.A. 1614-5; M.A. 1618. Ord. deacon (Peterb.) Feb. 25, 1615-6; priest, Nov. 19, 1618. Perhaps R. of Heyford, Northants., 1637-67. Died Mar. 11, 1667. (Baker, I. 187.)”.

The lengthy Last Will and Testament of John Bedford, “Clerke and Parson of Heyforde in the covnty of Northampton”, dated 03 January 1667/68 (proved in the Prerogative Court of Canterbury on 28 March 1668), contains a wealth of information concerning his extended family, now spread across numerous English counties, including his only surviving son in London, the same Thomas who bequeathed the piece of plate to his godson Gunning, poignantly not conveyed to him by his father William before his voyage to America. Thomas was “Deputy Register of the High Court of the Admiraltie of England”, also an Examiner, Translator, and Interpreter of Foreign Languages, and is the only bearer of the Bedford surname with a verifiable claim to hold Arms – recorded on his father John’s funeral certificate – and a Crest, granted in 1677/78: “Arms: Argent three Lion’s Gambs couped erect a bordure engrailed Sable / Crest: On a Wreath (untinctured) A demi Lion Sable crowned and holding between the paws a terrestrial Globe Or”, the motto being “Redde suum Cuique” (“Render to each his own”)**** – not “Animum fortuna sequitur” (“Fortune follows courage”), “Vérité sans peur” (“Truth without fear”), or even “Che sarà sarà” (“What will be will be”, echoing Marlowe’s spelling of the Italian in Doctor Faustus), as purveyors of Family Crests would have it.

Want to read more? Click here for Too Many Gunnings, part 4