Few clues exist as to the parentage of Gunning Bedford’s great-great-grandfather Aman and his brother Amos, the first represented by an early 17th century entry in the Heyforde Register,* “Brygett Bedford als Addams a verye olde woman was buryed the / 4th of Julye” 1606 – her only appearance in its pages – Brygett being the given name of Aman’s and Barbara’s second daughter, their eldest son christened as William. 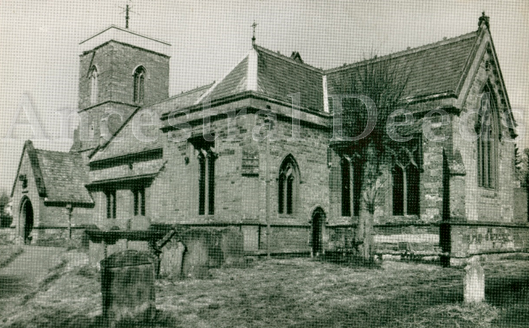 Amos Bedford was buried on 22 September 1616 at Potter-Hanworth, by his curate Richard Enderby, the husband of Aman’s daughter Elizabeth.** His nuncupative will, dated 16 September 1616 (proved in the Episcopal Consistory Court of Lincoln on 05 October of the same year), names no children, confirming his Inquisition Post Mortem’s identification of Aman as his next heir; he makes a term-of-life property bequest to his wife Alice, namesake nephew Amos Bedford (later Rector of Manton, Lincs.) to inherit his property after Aman’s death, “w[i]th this Charge That there should be / allowed out of his said landes for his other brothers / and Sisters whoe are yett vnprovided for in the / worlde”.*** The will and inventory of his widow Alice Bedford of Heighington, made on 05 July 1621 (proved in the Episcopal Consistory Court of Lincoln on 31 July 1621), confirms but does not add significant new Bedford information; however, it does reveal that she was first married to one Christopher Cooper, next to whom she wished to be buried in Nocton, Lincs,**** as she was on 07 July 1621.*****

An entry appearing midway between the two cited above may provide a candidate for Aman’s and Amos’ father, in the form of a fellow cleric with a similar given name:

Diocese of London Episcopal Register entries for Aemorus (elsewhere also spelled Aemerus, Aemer, Emere, and – most significantly – Amos) Bedford, “of the diocese of York”, record that he was ordained as an Exorcist, Acolyte, and Sub-deacon on 04 March 1541/42 in the Vestibule of St Paul’s Cathedral, all events taking place on the same date by dispensation of the Archbishop of Canterbury (no letters dismissory).******

He was Vicar of Bedford St Paul at the time of his burial there circa 1576; the webpage St Cuthberts Rectors, which spells his given name as Emere, records the date of his interment as 18 March 1576. However, Bedfordshire County Record Office notes in the introduction to its transcript that there are two versions of the register, Reg.1 being a copy of Reg.2, further stating that there are no burials listed between February 1575 and September 1577, therefore dating this event to 18 March 1577/78: “Mr Bedford ‘parson of St Cutbards & Vicker / of Paulles’”. When reading the original composite Register on microfilm, I transcribed the entry as “Mr Bedfor p[ar]son of Cutbards and Vicker / of Paulls burried the xviij daie” of March 1575/76, a contemporary hand having written “1576” in the left margin near the point at which the new year began (25 March), “1577” having been crossed out immediately above, and previous entries verified as dating to 1575.*******

With Buckland Parish Registers not surviving until 1658, and no will for Aemer Bedford yet discovered, it has not been possible to confirm or refute possible kinship with Gunning Bedford’s great-great-grandfather Aman and his brother Amos, or to establish whether it would be safe to identify him with Lincolnshire cleric Amias Bedford, who was a co-defendant with his wife Alice, and others, in an assault case tried in the Court of Star Chamber during the reign of King Henry VIII, their alleged offence inciting and abetting rather than perpetrating the crime.

Want to read more? Click here for Too Many Gunnings, part 5