I had intended to commemorate Guy Fawkes Night by translating an Elizabethan Recipe for Fireworks held in the State Papers Collection of The National Archives at Kew, but it turned out to be more Molotov Cocktail than Sparkler – arguably appropriate to the historic events of the day, but not so much for a how-to-make-this-at-home post on the ’net.

Returning to a computer terminal in the Map and Large Document Reading Room to explore the Discovery Catalogue further, my eye was caught by a Chancery Pleading with a loose connection to a historic recipe I transcribed in May, as the Defendant in the case had the intriguing occupation of Keeper of the Ink-pot in the Court of Common Pleas. Not having run across this ‘old occupation’ before, I ordered up the record-set in the hope of learning more.

The catalogue dates its petition to “1465-1471, or perhaps 1480-1483” on the basis of the full title of the Lord Chancellor addressed, but there is an endorsement in abbreviated Latin on the back which supplies an additional clue in “die Mercurij xiiij die Nouembr[is]” – (on) the day of Mercury (i.e. Wednesday) the 14[th] day of November – which reduces the possible years in play to 1470 or 1481:

Three components of the suit survive, all in a remarkably good survival condition, with only minimal staining, which doesn’t impact legibility:

Yeoman William Forster complains that John Botiller, “keper of the the Inkepote of the co[mm]en place” [i.e. Common Pleas] maliciously feigned a debt of £10 in his own name in a forged Bond of Obligation, which led to Forster being “vttelawed”, with all his goods to the value of £10 escheated and a “capias vtlegatu[m]” – a writ to “arrest the outlaw” – issued against him. In the 9th year of the reign of Edward “late in dede Kyng of England”, by the same writ, feigned plaint of debt, and forged Obligation, the Sheriff of London attached and imprisoned him, without the possibility of delivery unless he paid the sum of 43 shillings 4 pence yearly to seal the Obligation, also paying in hand 26 shillings 8 pence “to his vttermost vndoyng”. He therefore requests a writ of subpena be issued to John Botiller, to summon him to answer to the premises, with Pledges to prosecute named as John Stikforth of the parish of St Giles in the Fields in the County of Middlesex, “Tailour”, and Roger Weston of the City of Westminster in the same County of Middlesex, “Capper” [i.e. cap maker].

Although no regnal number has been included to specify which King Edward, with 1483 being the sole year of the reign of King Edward V, and 9 Edward IV corresponding with 04 March 1469 – 03 March 1470, it’s safe to conclude that the Bill’s endorsement dates to 20 November 1470, with the Lord Chancellor and Archbishop of York addressed in the heading therefore being George Neville (brother of Richard the “Kingmaker”), rather than Thomas Rotherham. A possible confusion caused by Edward being styled “late in dede Kyng of England” is explained by King Henry VI having regained the throne between 09 October 1470 – 14 April 1471 during the Wars of the Roses. 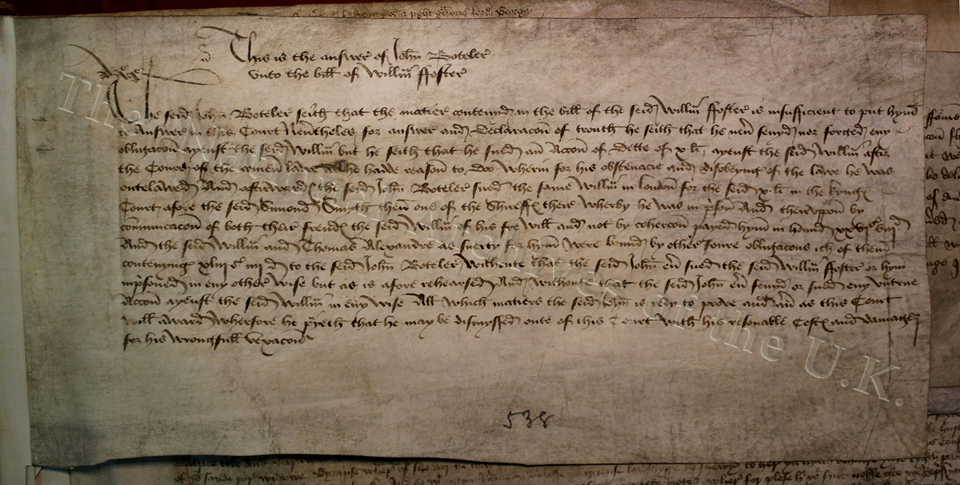 In his Answer to the Bill of William Foster [sic.], John Boteler [sic. – a different scribe was clearly using the Chancery inkpot] denies the charges made against him, retelling the same tale from the opposite point of view without adding further detail, and ritually concludes by declaring his willingness to prove his version in Court, requesting that he may be dismissed “with his resonable Cost[es] and damagez for his wrongfull vexac[i]on”.

In his Replication to the Answer of John Boteller [sic. – yet another scribe at the inkpot, recording surnames as they sounded], William Forster repeats his Complaint in truncated form, asserting that he paid the 27 shillings 8 pence “by coherc[i]on” so that he might be released from prison.

Although these documents sadly didn’t illuminate the defendant’s occupation of Keeper of the Ink-pot in the Court of Common Pleas, I presume that John Botiller had responsibility for the clerical department (thereby having the means and opportunity to commit a forgery, which of course doesn’t mean he actually did), and I will remember him the next time I read through late Mediæval De Banco Rolls at TNA. For Chancery suits dated 1544 and earlier, Decrees and Orders are recorded on the verso side of the Bill of Complaint, which in this case only reads “Coram d[omi]no Rege in Canc[ellaria] sua” – “Before the lord King in his Chancery” – followed by the date. As a large proportion of suits were dropped or settled prior to being heard, it is likely this case did not continue on to a verdict, and the ink bottle has run dry …