I ordered up a festive document to read in the Map and Large Document Reading Room at The National Archives, to celebrate today as the first day of Winter and toast Yuletide in style: a Tudor-Stuart era Recipe for “Eppocras” (a mulled wine, more usually spelled as Ypocras or Hippocras), sized to fill the largest Wassail bowl. Physically, it’s as petite as its contents are lavish, presented in a dedicated envelope measuring 5 by 5½ inches, the paper unfolding to 8⅓ inches by 3¾ inches. 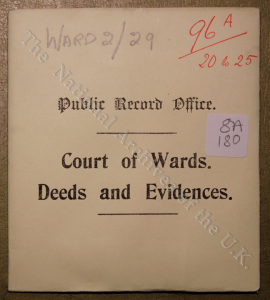 Though it’s internally undated, the online Discovery Catalogue ascribes the broad timeframe of “1600 Jan 1 – 1700 Dec 31” on the basis of “[c 1600-1700]” having originally been entered as its textual date. A further clue may perhaps be offered by the series in which it was filed – WARD 2 – running from c.1200 through the reign of King Charles I. Whether it was written in the early or late 17th century, its survival condition is remarkable – no tears or ink-fading, and no evidence of the baptism by liquid ingredient which is a staple occurrence in my own kitchen:

Eppocras of A gallon of wyne .
Take A gallon of Clarett wine of ye depeste Culler
putt therto j lb ¼ of sugar, 2 oz of Sinamon, ½ an
oz of ginger, ¼ of an oz of nutmeges  ⅛ of an oz
of Cloves, And so sett itt A steepinge .

I haven’t tested this recipe yet, not having a cellar to store gallon casks, but I may try quartering the measures to fill Santa’s glass on Christmas Eve.